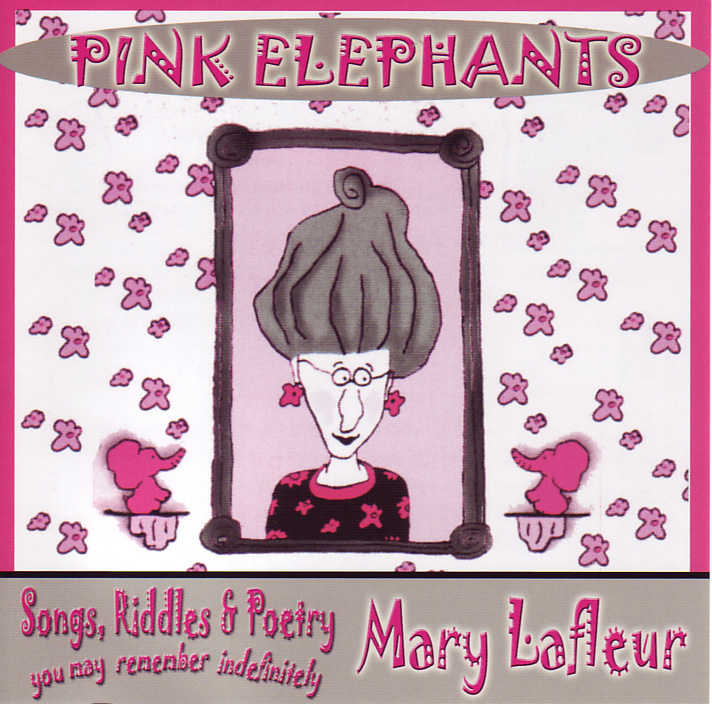 Pink Elephants:
Song Riddles and Poetry
You May Remember Indefinitely

Although she had never heard a cassette or CD of songs interspersed with spoken word poetry, Mary was sure it was what she wanted to do. Several poems had been published in Ladybug and Spider Magazines by the spring of 1994, and Mary had spent the winter writing more poetry. She wanted to take her listeners on a whimsical romp of silly and serious poems and songs framed in an atmosphere of warmth and acceptance. And that is exactly what Pink Elephants seems to be.


In the fall of 1993, I heard that Disney was holding auditions for children's performers in Nashville. Since I was already writing poetry for children, and had written a few children's songs once upon a time, I decided to write a song and audition. That night, I wrote "Goldilocks" in about 15 minutes. The audition went fine and I wrote "Chicken Little" for the call-backs. When the Disney rep. asked if I had more songs like these I admitted that no, I didn't. I was running a licensed drop-in day care for homeless children at the Salvation Army. The Disney folks were a little miffed, but was born.

That fall and into the spring of 1994, I continued to write music and poetry for kids. When the day care won the national Junior League Program Award I went into the studio, hoping to make a cassette in time for the Dallas convention. The trip went wonderfully and I even got to sing "I Love You 100" for over a thousand Junior League delegates, but the tape wasn't done because of the artwork.


In June of 1994, I quit the day care and began singing. On a fall trip to a theme park, I realized I could act out a lot of my songs since the words are familiar to most people ("Someone's been sitting in my chair!") and the choruses are easy to learn. Voila! I was in business.


PURCHASE MARY LAFLEUR'S RECORDINGS FOR THE YOUNG PEOPLE IN YOUR LIFE!
Listen and order a CD or MP3 download at CDbaby or see major MP3 downloading companies like iTunes

, Napster and Rhapsody to purchase individual songs, poems and riddles or full CDs.

Watch for updates on this site as the people who loved and admired Mary
work together to put more of her treasured work on CD and MP3.