(This is a website entry written by Mary in approximately 2005.)

This is a picture of Tiger Fitzhugh and me with Gary Oleyar in the Dixie Dogg Music studio in Nashville. Tiger worked on all of my projects, writing out the charts and helping to line up the players as well as playing on almost every song. Tiger is a professional guitar player who's worked with some big names on the road, teaches at a local college and performs regularly in Nashville.

Gary did a wonderful job producing my second children's project, More Pink Elephants. He even sent the opening song to New Jersey so a friend could lay down special guitar tracks there.

I'm thinking I must have swung by the studio either before or after a concert because I only wore those wild pants singing. When we moved to Lexington in 2000 I finally sent them to the thrift store.

Below is a picture of Angel Pontier who produced the other four children's music projects of mine, Pink Elephants

, Pink Elephants in Paris, The Pet Project, and I Love My Day School. Angel and I also co-wrote some 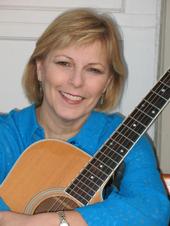 Christian music back in the old days. She still performs regularly in Nashville venues and churches.

(Our note: Mary willed her publishing company with a large catalog of songs and poetry to Angel before she passed away in 2007. Angel is a well-known Nashville studio owner, producer, songwriter and owns her own publishing company. She is one of the many people in the music industry who felt Mary had a magical quality in the studio that not many artists have.)